STUDIES IN RELIEF: Exploring Woodcut and Raised Printing in The Maslow Collection 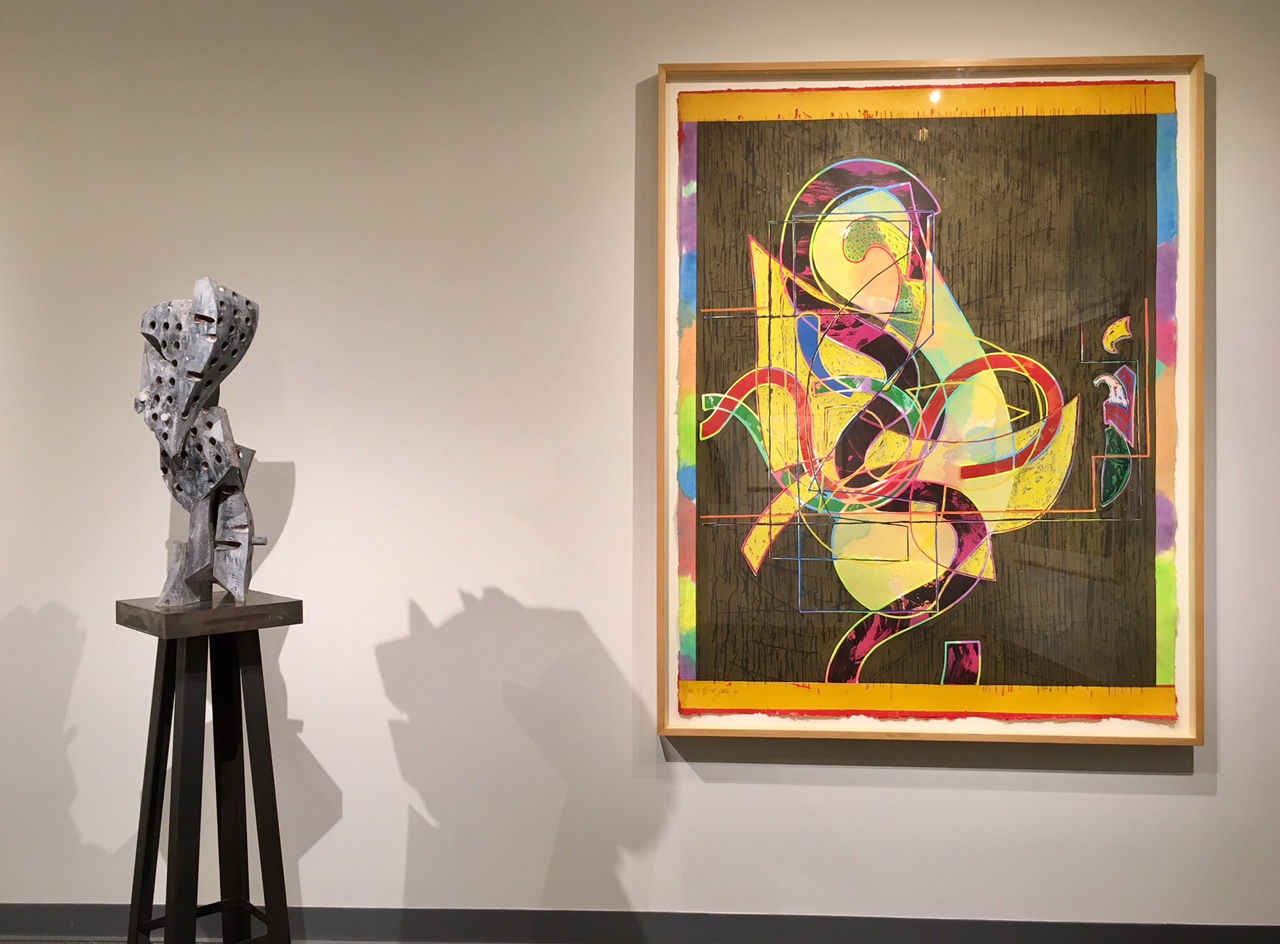 
Work for the exhibition “STUDIES IN RELIEF: Exploring Woodcut and Raised Printing in The Maslow Collection” was selected to highlight examples of relief printing used exclusively or in mixed media applications.

In the 2018 spring semester three courses in printmaking were taught by Peter Hoffer. One of these courses, basic printmaking, deals primarily with relief block techniques, including wood and linoleum. The other two cover areas in addition to relief, or block, printing.

Other than the Roy Lichtenstein and Frank Stella prints, all works exhibited demonstrate the woodcut used alone to create work.  These exceptions use the woodcut but also other processes such as screen printing or lithography in mixed media combinations.

Through the use of this early and basic method of printing, the prints on view collectively convey the wide range of stylistic and technical effects available today to the creative printmaker.

Jim Dine’s large and colorful signature Kindergarten Robes, a woodcut block printed twice side by side on one paper in contrasting colors, was hand carved and press printed. This conveys dynamic gestural and textural qualities inherent in the medium.

In contrast, the woodcut print realized by Francesco Clemente almost suggests a watercolor painting, belying the actual material used. The technique employed is that of the traditional Japanese color woodcut, or ukiyo-e print. Printed by hand with brush-applied water-based pigment, this print is a technical tour de force executed by master printers working directly with the artist. It should be noted that this impression is one of many in a large edition, all of which are in likeness essentially interchangeable.

Puppet, a large woodcut by Susan Rothenberg, an American painter and printmaker gaining prominence in the 1980’s, is informed by the German Expressionist woodcut of the early 20th century, echoing her involvement in neo-expressionist trends.

Mel Kendrick, a sculptor working in wood, also creates prints using wood, at times using the surface of his sculptures for printing to exploit the grain patterns unique to wood. Kendrick’s bold but nuanced black and white images, emphasize angularly constructed shapes and form. Appearing to be cut into sections, the parts are inked in a variety of ways, then assembled and press printed, achieving interesting and dynamic spacial relationships. It also seems that varying press pressure was employed to create slight tonal and textural contrasts. The cut block, jigsaw approach is akin to one used by Edvard Munch to achieve multi-color printing with one pass. Although in Munch’s case, he printed by hand rather than with a printing press.

In Meltdown, Sherri Levine’s woodcut print could have been achieved using screen printing, lithography, or Intaglio. However, the quality yielded and the ‘finish’ of the image, are to the discerning eye unmistakably achieved by wood, which is what the artist felt was needed. The image is actually one informed by early computer-generated imaging capabilities and printing technology, characterized in its relative infancy by obvious pixilation that today seems primitive and unknown. Perhaps the artist’s statement was in part ironic, using the ancient, pre-industrial woodcut material and form to convey a late 20th century concept addressing the exaggerated pixel, primitive also in its way. A final thought to consider is that the execution of Levine’s printed image, using wood, is highly sophisticated, technically masterful and precise, suggesting the technological advancement to come based on cruder beginnings.

Sleeping Muse by Roy Lichtenstein and Pergusa Three by Frank Stella are large, technically and visually complex prints employing wood in concert with other processes- lithography and screen print in the case of Lichtenstein and relief etching in the case of Stella. These are works, done in Ateliers or studios operated by master printers and publishers, where artists and printers create masterful prints in collaborative effort. Known as mixed media, these particular examples use lithography, screen printing, and etching (printed as relief) as additional ingredients in the sauce. Generally speaking, the undertaking of large and technically complex prints such as these require the skills and expertise of master printers as well as their well-equipped shops- ones with appropriate presses and generous space.

Students and other visitors to the gallery are offered a glimpse into the world of the woodcut, an ancient printing method that continues its relevance and influence as an art form. Although the oldest and most direct of all the printing processes, the simple woodcut is deceptive in its potential for boldness, complexity, and visual expression. The exhibit also offers students an opportunity to view firsthand the signing and presentation of limited edition fine art multiple-originals by notable contemporary artists. 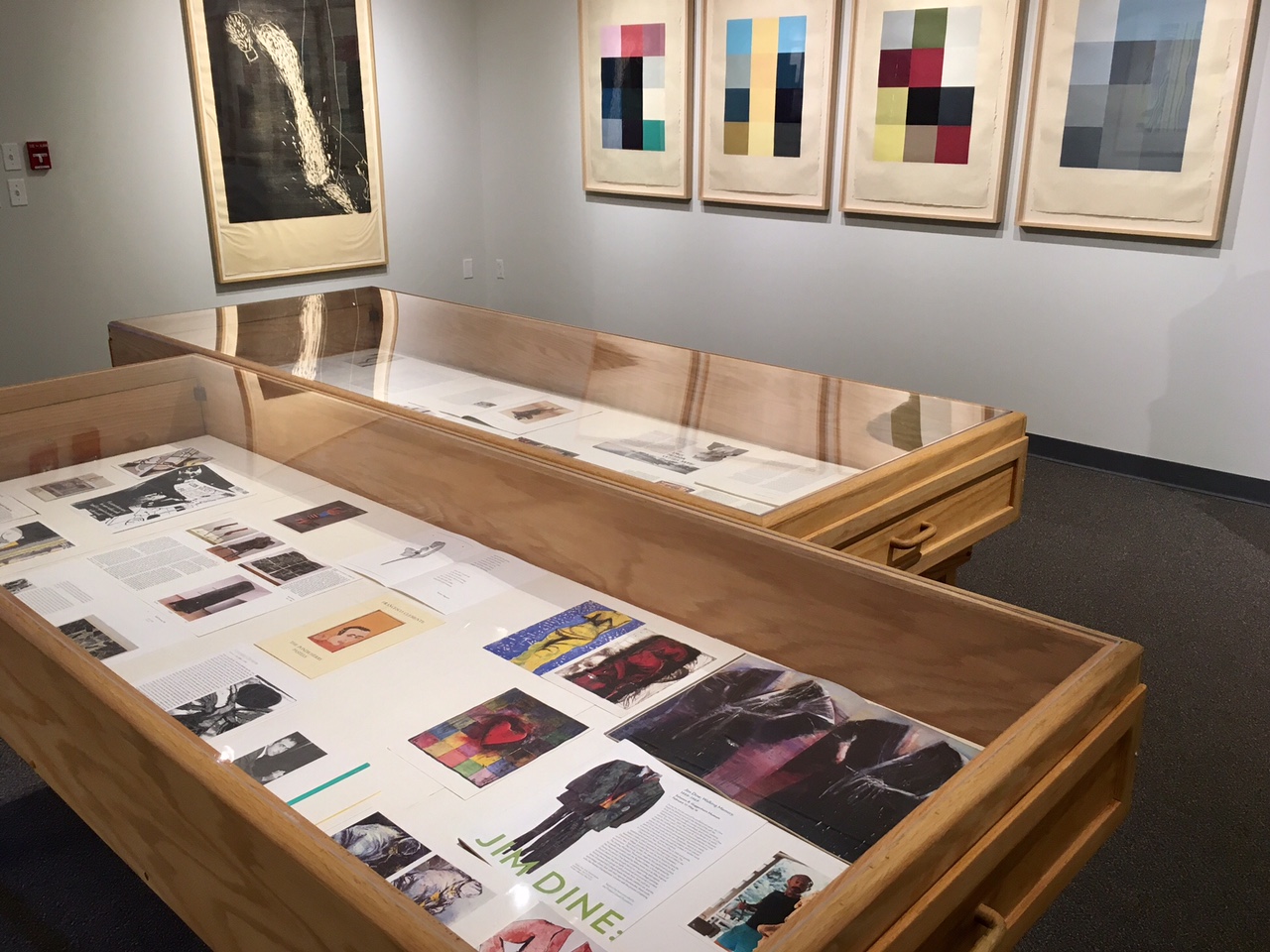 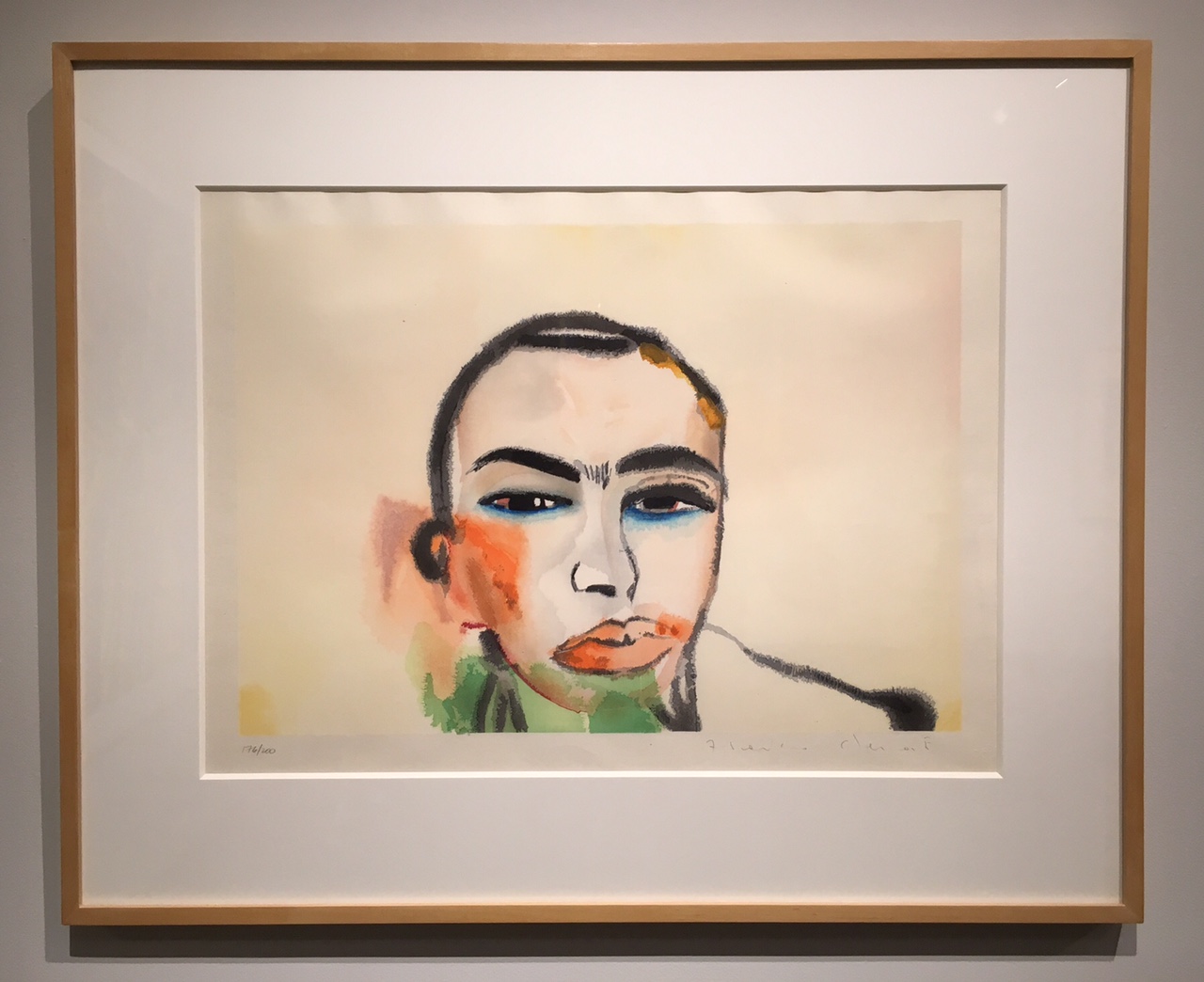 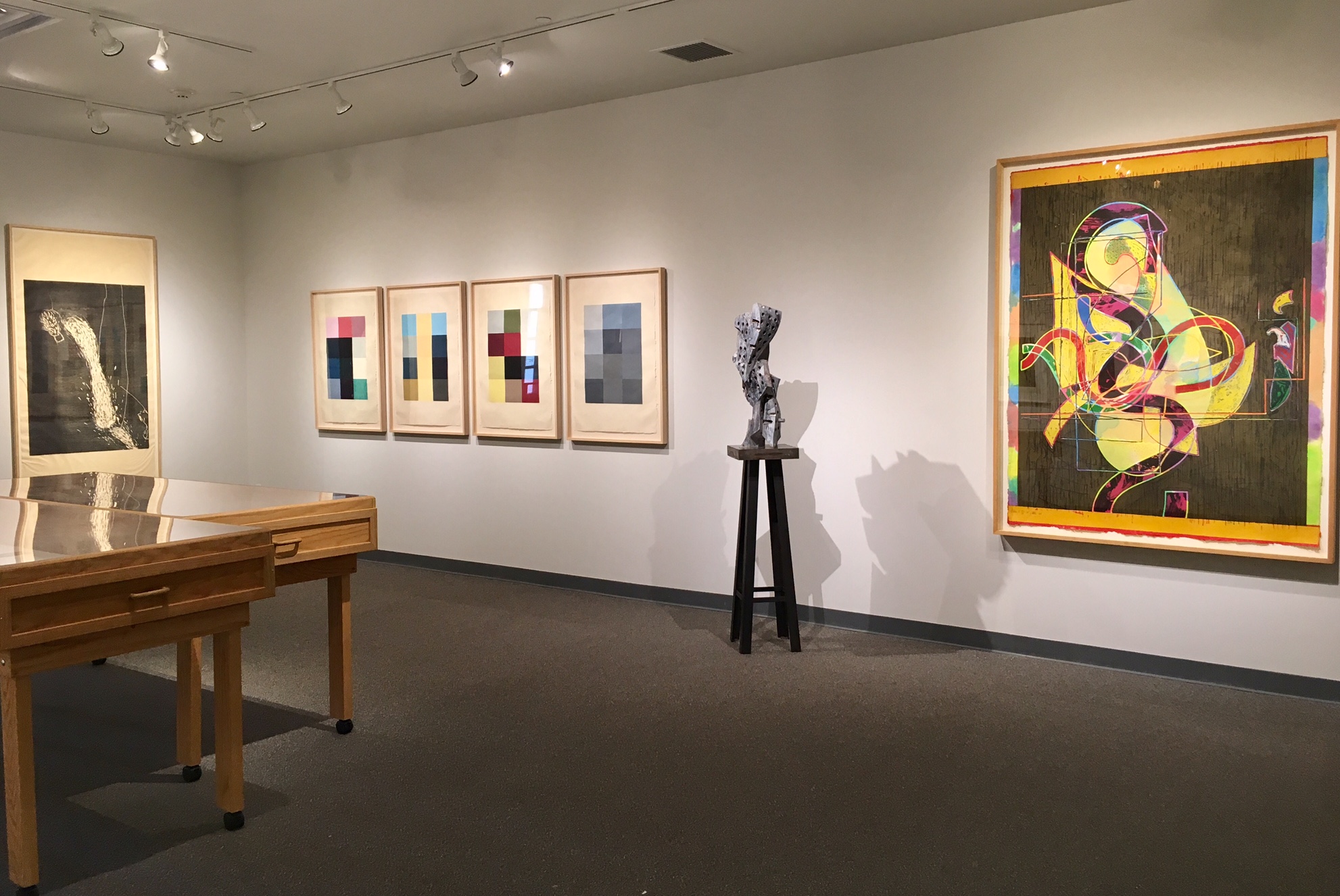 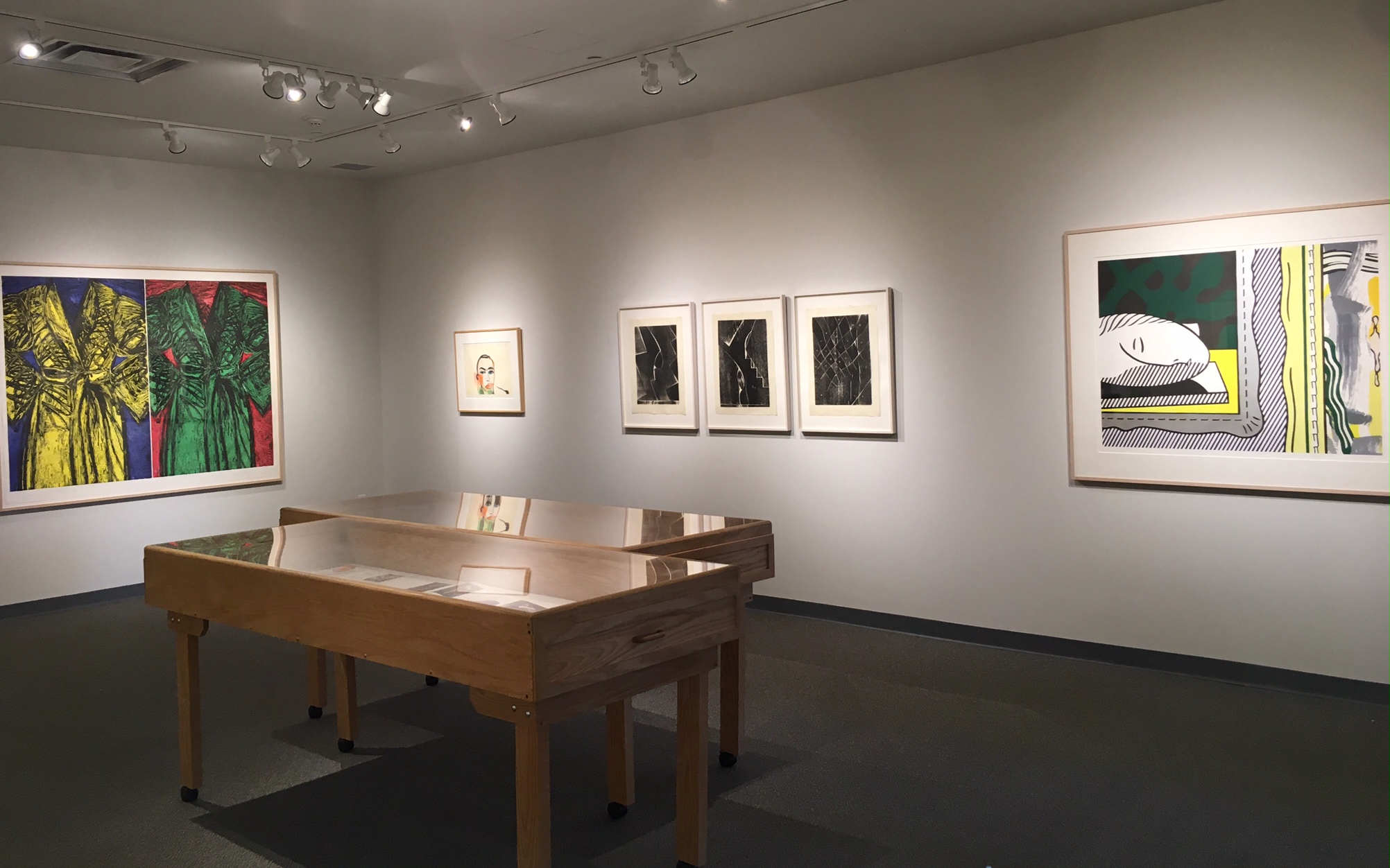